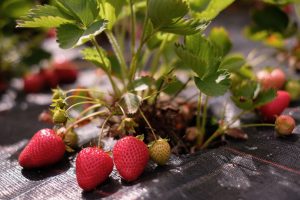 It’s strawberry season, hurrah. There’s no food that evokes British summer like this jubilantly juicy fruit. I’ve yet to meet someone who doesn’t love them and from my personal experience it’s impossible to overdose on them too. And believe me, I’ve tried.

I’m helping out my friends Graham and Ruth Eggins on their mixed farm on the wild one-mile-long island of Bryher in the Isles of Scilly, best known perhaps for its Atlantic-bashed Hell Bay. The Eggins produce pretty much everything from beetroot and broad beans to beef, but the crop that flies fastest off the honesty stall outside their Hillside Farm is their strawberries. Holidaymakers abandon their breakfast coffees or jump on early boats from neighbouring islands to hover outside the barn where Graham and Ruth pack them first thing. Snooze you lose. And a day without strawberries on Bryher in June is a loss indeed.

If you think you’ve tasted a good strawberry, quite simply, you haven’t. (Okay, if you grow or pick your own, I’ll grant that you might have. Possibly.) The Eggins’ secret? They leave their elongated fruits to ripen on the plant until they’re mature and fragrant. That means properly ripe; so no coral underbelly, no white collar, but pillar-box red top to toe. Warmed by the summer sun, they’re so gorgeously sweet you can throw away your sugar packet.

Of course Hillside can do this as their strawberries are sold and eaten within hours, if not minutes, of gathering. In contrast, supermarkets have to pick these fragile fruits underripe to ensure they last, so the sad truth is that many of us have never tasted a strawberry at its best. And although supermarkets no longer worship solely at the shrine of Elsanta, the varieties they’re chosing are still selected for shelf life, disease resistance and transportability. Here at Hillside the Eggins have chosen their variety (which is a closely guarded secret) for flavour. Yes, flavour. Remember that? Flavour that fills the mouth with summery ecstasy, and for many of us, the flavour of childhood. 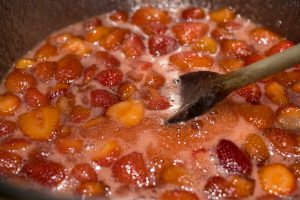 If you care about your health and that of your natural surroundings, it’s also good knowing that nothing has been sprayed on Hillside’s strawberries. Did you know that “conventionally” grown strawberries contain the most pesticide residues of any fruit and vegetable we buy in Britain after citrus fruits? UK government tests carried out between 2011 and 2015 (the most recent years for which figures are available) found that over 91% of strawberries showed residues of a single pesticide while over 87% showed several. A cocktail of pesticides aren’t what I want to eat at a midsummer fete or al fresco supper at home. Two of the most commonly used in 2013, Boscalid and Iprodione, were known carcinogens.

Even if Hillside wanted to use these pesticides (which they don’t – they value the biodiversity of their insect life), they’d actually be unnecessary as the only threat to the strawberries is the rain which can damage a few if you don’t get to them on the right day (and is making Hillside consider switching to growing them on tabletops so fruits are not sitting in water). And occasionally, birds; although the strawberries are netted, somehow the birds find their way in, so the task of gathering strawberries can also entail cajoling terrified blackbirds towards an exit. One feels like saying ‘You shouldn’t have come in if you didn’t know how to get out’ but they carry on. At least I’ve not had to do battle with a kamikaze seagull yet.

Fruits that are less than perfect go into jam (pictured), which Ruth makes and sells on the stall along with the raw fruits. What jam – full of whole strawberries that you can sink your teeth into. It’s decadently good with fresh Hillside strawberries, homemade scones and local clotted cream as I discovered when Ruth laid on the lot for tea (pictured) last week when a crew were filming the farm. Life doesn’t get better than that. 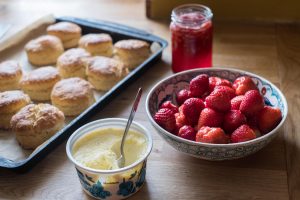 June is strawberry month here. If ‘for ever’ means all year round, Bryher’s strawberry fields are NOT for ever and in a couple of weeks my nostrils will no longer be filled with strawberry-scented aromas. But seasons are good, they make life interesting, give us something to salivate for. Just as it was asparagus’ turn before the strawberries, when the strawberries are over, courgettes and tomatoes will be the next seasonal treat. As Graham puts it,”If you have Christmas every day, it wouldn’t be special. The strawberry season is special because you look forward to it.” I don’t want sprayed strawberries that taste of cardboard in the winter. I’m happy to wait for a proper June one – and come to Bryher to find it!