Polish food might not be the first thing you’d expect to find in the capital of Carmarthenshire, in West Wales, but Polish-run Karm’en Kafe, in the side streets of Carmarthen, is proof that unlikely surprises can be delicious. Here, alongside Carmarthenshire’s typical Cawl (lamb and roots soup), you can find Polish classics like Placki (potato and onion pancakes) and Zapiekanka Polish-style open-faced sandwiches liberally doused with tomato ketchup. I was lucky enough to stumble across this unusual eatery while researching a foodie piece on Carmarthenshire for Olive magazine.

Like so many of the world’s most successful businesses, Karm’en Kafe started “by accident.” It’s owned by Kasia Strykowska, who came to Carmarthenshire to be with her husband Tad who got a job here as an ENT doctor. Kasia was trained as a nursery teacher, but couldn’t get a teaching job in Carmarthen because she didn’t speak Welsh. She decided to open a cafe, and happily found tiny premises on Bridge Street, just off Carmarthen’s main square.

It’s a simple spot, at lunchtime offering sandwiches and panini from Kasia’s homemade breads, along with pizzas, soups and tagines. For tea there are blockbuster cakes (I tried her Lemon Polenta, and if you want Polish, Kasia often makes Karpatka, a choux pastry pie which she says is “in the form of the Carpathian mountains”.) Her cinnamon rolls (pictured) have become legendary. But as much of a draw as her cakes is Kasia herself – a gentle soul who makes everyone welcome. Tad, who helps out whenever he can, is equally delightful.

Occasionally Kasia runs special Central European lunches, serving small dishes at around £6 each. But the thing that really caught my eye was her Gourmet Dining Club, held once a month on a Friday evening. Guests sit in the tiny dining area downstairs (admire the hand-painted wall mural as you eat) and get a three-course meal for £22 per head. A recent menu included Rosal Chicken broth with home-made pasta for starter, and Slow-braised feather-blade beefsteak for main. You choose your pud from the cake stand or fridge. Stonking value I’d say – anyone want to join me at the next one?

You can read about Karm’en Kafe, and other Carmarthenshire food treats, in the March issue of Olive, just out. 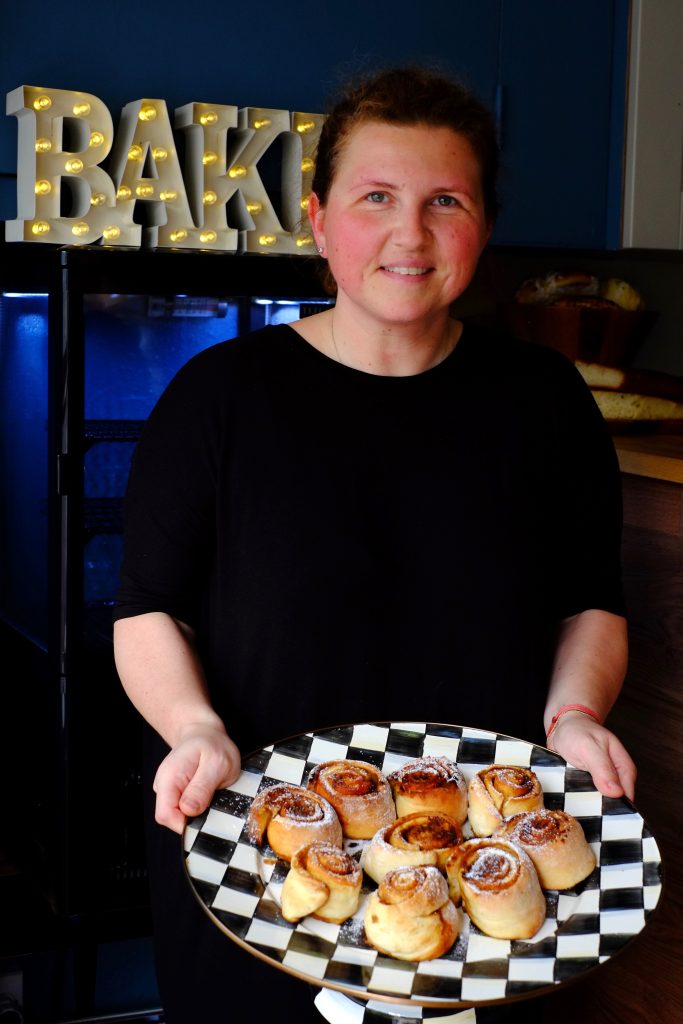