I must have first visited the Black Swan at Olstead, on the southwestern fringes of the North York Moors, six or seven years ago. It was a comfy country pub in the middle of nowhere (nearest landmark Byland Abbey) serving elaborate variations on a theme of meat and two veg. But its special point of difference was that it was run by Mum and Dad Banks and their two sons James and Tommy. Tommy was working in the kitchen with its head chef Adam Jackson, while Mum and Dad served in the bar and kept food journos like me entertained. The village was silent as a morgue as I crept outside to the room next door they’d just converted into swanky B&B accommodation.

What a change when I returned to the Black Swan in October for Olive magazine. Tommy, the Banks’ youngest son, now 28, had not only won himself a Michelin star (four years earlier) and  triumphed twice on the BBC’s Great British Menu (2016 and 2017) but a few weeks before I arrived, the inn had been named the best restaurant in the world by TripAdvisor (I know, what do they know about food? But hey, being named best in the world is a pretty cool accolade anyway). The car park was packed with BMWs, and my single room had now turned into nine, several inside the house that used to be Tommy’s grandmothers. Mum and Dad had been substituted by younger staff at the bar.

An eight-course tasting menu was the only option on offer, many of its ingredients happily sourced from the kitchen garden behind the inn and, in the case of foraged ingredients, the Yorkshire hedgerows. (The hogweed seed, honey and elderflower custard served with sheep’s yoghurt ice cream for dessert was spectacular). The jars lining the shelves in the smart first-floor restaurant were filled with fat jars of leaves and fruits that Tommy pickles and preserves to extend their season.

The highlight, though, and the dish that can never come off the menu, is the Crapaudine beetroot, an ancient French variety of beetroot that’s the size and shape of a very large turnip, and gets its name from its warty skin (crapaud being French for toad). It’s grown on the farm by Tommy’s dad, and once pulled is stored in straw which means it’s available all year round. Tommy slow-cooks slices of it in Dexter beef fat for around four hours – not in the oven as you might imagine, but on the top of the stove. The chunky beetroot slices are crowned  with creamy clouds of cod’s roe and horseradish, interspersed with delicate linseed wafers. As I eat the dish, I can almost imagine the Crapaudine’s robust flesh is meat. No wonder the chefs dub it ‘meat root.’

Beetroot may be the simplest ingredient, but the Banks’ genius is that they’ve chosen a variety you won’t find anywhere else and as they grow it themselves on the farm they don’t depend on erratic suppliers. Working on this same principle, they also grow delicately flavoured Alpine strawberries which greet you at breakfast. “They taste best when minutes after being picked, ” Tommy’s dad tells me. “So we grow our own in the garden next to the pub.”  So it’s no surprise, perhaps, that Tommy’s first book, just published, is called Roots. For roots is what the Banks family are all about – even if the place they’re serving them in is now up-scale restaurant rather than gourmet village boozer.

To read more about The Black Swan, and other eateries on the North York Moors, read my feature in the April issue of Olive Magazine. 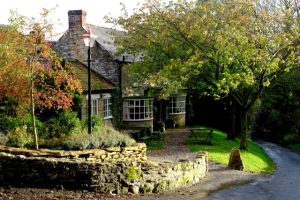 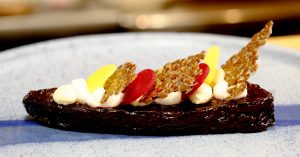 Wright’s Emporium is in the middle of Welsh nowhere, and from the outside looks like a ramshackle pub that the modern world forgot. But inside, what a find! Its Emporium designation, suggesting an Aladdin’s Cave of gourmet surprises that evokes shrieks of childish delight, is spot on. The Wrights part refers to its food-writer owner, Simon Wright and his wife Maryann, who runs the kitchen.

At the far end of its comforting warren-like interior is a wine store (pictured below) offering mostly biodynamic wines that are sourced direct from their European producers. If you like, bring your own bottles and fill them up yourself – sustainability is very much part of this place’s ethic. The heart of the place is a deli crammed with local goodies, from cured meats from Charcutier, to Hafod Cheddar (one of my favourite cheeses) and Wright’s own tomato Catsup (a variant on ketchup) (pictured). There’s freshly baked bread (pictured), and local meats, fruit and veg too.

The highlight, though, is the daytime cafe (open evenings on Fridays and Saturdays), where you can kick off the day with a bubble and squeak made from kale, and topped with a poached egg  (pictured). With its mismatched bare tables, bookshelves, and spreads of just-baked cakes, it’s a deliciously relaxed spot in which to enjoy Maryann’s European-influenced rustic cooking. Dishes might include a Tartiflette, a Rare roast beef tonnato, or Fried aubergine with labneh. Or if you’re in a hurry, the Pork belly cubano (£8) will set you up for the day, and don’t leave without one of their brownies, as big as bricks. Upstairs there’s even a bijou apartment which you can rent. Its location, the village of Llanarthne, is a perfect spot from where to explore Carmarthenshire.

You can read more about Wrights in my article on Carmarthenshire’s food for Olive magazine here. 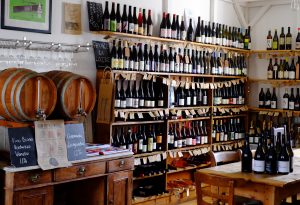 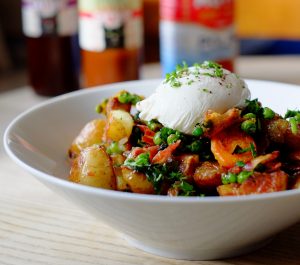 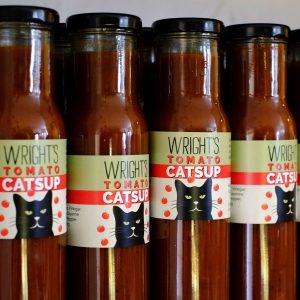 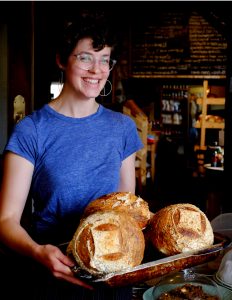